A Short History of an Interesting Park

he Zoo Lake Park has been a city gem since it was gifted to the City of Johannesburg by Hermann Eckstein in 1904. People are the Heartbeat of Johannesburg - the City of Gold - The Zoo Lake Park lets them breatheThe land which includes both Zoo Lake and the Johannesburg Zoo was ceded by means of a Deed of Gift:"...in trust for the inhabitants of Johannesburg...to be used for the purpose of a public park". It is a place where all can come and relax in a green oasis of some 46,6 hectares. Although close geographically, it is emotionally distant from the City's vibrant hurly burly, and is available to all who wish to relax, unwind and enjoy nature's quiet bounty of calming greenery, lush lawns and trees.

During the Apartheid years the government was unable to restrict access to this park by all races by virtue of the wording contained within the Deed of Gift. During this time all the citizens of Johannesburg were able to enjoy the park. Its history of resistance is celebrated to this day. With the recent economic hardship that has befallen South Africa, the City has been unable to allocate any resources to the Park, its role being limited to simply mowing the lawns and clearing the rubbish. As a result of neglect and overuse, the Park has slowly decayed and its future is under threat.

Residents, many of whom lived and were brought up in close proximity to the Park and who have a great love for the Park, and other concerned citizens of Johannesburg have taken on the responsibility for the restoration and development of the Park. Their aim is to work towards its rehabilitation, development and ultimately being recognised as a World Class city park.

The Zoo Lake Development Committee NPC (often referred to as the Zoo Lake Users Committee, which was its predecessor) is a non-profit organisation that seeks to restore, enhance and develop the Zoo Lake park, in conjunction with the City of Johannesburg. The members are all volunteers who share their passion about the Zoo Lake park.

The Committee and its activities are financed purely by donations.

The citizens of Johannesburg share a great love for our park with its anti-apartheid history. This is demonstrated though the actions of a large number of volunteers and donors. The park is there for the enjoyment of all who use it. It is a welcome green lung and is a respite from the hustle and bustle of a very active and noisy city.

We believe that a well functioning public park builds bridges between communities and serves to enhance our democracy.

The company has been registered by the South African Revenue Services as a Section 18A company. In terms of this approval, all donations that are made to further the purposes of the Committee may be deducted from the donor's taxable income in the year in which the donation is made.

How You Can Help Zoo Lake 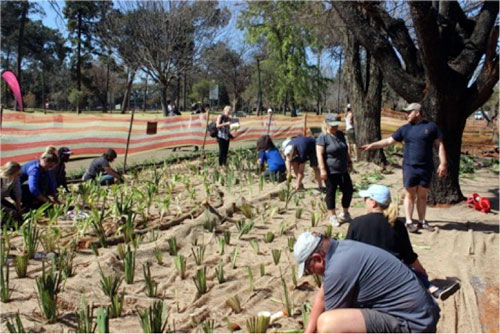 Making an immediate impact on the Park is as simple as rolling up your sleeves. Dedicated teams of individuals, families, and school groups are actively involved in keeping Zoo Lake Park beautiful and welcoming year-round.